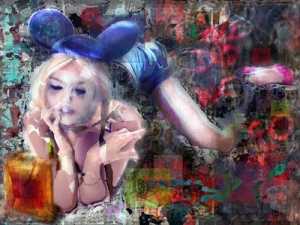 Enter your email address below and we'll email you when there is a new TRXTR artwork added.

The rich and seductive mixed media digital canvasses by Newcastle born Trxtr have a depth and intellect that goes way beyond the multi layered and textural qualities of the finished works of art, which appear at first glance glamour based. The pseudonym Trxtr has its origins coming from the universal primitive spirit ‘the Trickster’ both humorous and malevolent who meddles and shape shifts mischievously disrupting the status quo .

Growing up with a ’good’ Protestant family background and a childhood fascination for drawing and collecting animals Trxtr studied Fine Art (Sculpture and screen printing ) in Newcastle. In 1973 he abandoned his studies to work independently on a Northern Arts funded Environmental Sculpture project in Northumberland and the USA. Working on oil rigs to fund his work his natural curiosity took him armed with his 5x4 camera to document the creation of low impact and hidden environmental sculpture or ‘Rural Graffiti’ developing his interest in the evolvement of natural decay, deterioration, patinas and rust.

Trxtr is particularly interested in the hardware of war where the ‘instruments of death’ are often superstitiously adorned with naive and garish graffiti applied by members of the crew. Glamour models were particularly popular as a vulgar point- scoring system of war trophy symbols of successful enemy contact.

With an interest in the spirit of Josef Beuys’s taming of the Coyote, Trxtr has matured his prolific photographic collections with the juxtaposition of concepts and religious confusion, politics and male power by use of collage and paint overlays. He uses digital processes because they reflect the same confusions, obsessions and over saturation of our world of mass information and cross cultural junk.

Fleeting temporary images and throw away faces which appear on the internet are immortalized by Trxtr’s paint treatments on canvas with luscious colour, translucent depth and quality and then, at times, given status with a traditional ornate gold frame. Trxtr uses the simple coding of the face (eyes, ears, nose, mouth) to question why certain combinations are more beautiful and alluring to us humans. The same concept applies to the animal kingdom. Is it Survival of the Fittest in a virtual reality?

Trxtr plays with our heads by creating virtual beauties where the power of the glamorous woman seems to symbolize Democracy (and War) as opposed to Communism or Islamic Fundamentalism. The mass media obsession with over indulgent celebrities, sexuality, lady boys and the manipulation of beauty where the FAKE versus the REAL takes on a virtual power which threatens the Status Quo depending on the political persuasion. What do we believe? Is any of it real? Where is the morality and principles of the laws which govern us? Do we actually care? Who is to say the apparent Civilized Democratic West has the answers as opposed to those governed by male dominated strict cultural traditions, religions or outdated totalitarian regimes? Our jet planes and airports symbolize our freedom to exploit other countries with the cheap Cultural Imperialism of Tourists. Now they have become terrorist danger zones. These are the themes Trxtr explores, they are endless and there is no resolve, they just continues to evolve........