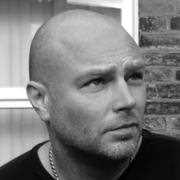 Enter your email address below and we'll email you when there is a new Rourke Van Dal artwork added.

Rourke Van Dal is an artist out on a limb, what is considered the norm is out of the window, a risk taker, he explores and invents every technique known to man, an true Artrepeneur. A player in the evolvement of the movement known a Urban Art, which rose from the Streets, an art which began life as an ephemeral art form disappearing as fast as it appeared. It grew on a worldwide scale, with major Auction Houses cottoning on to its potential. Urban Art completing its transition from underground subculture to mainstream art movement, and continues beyond today. His journey from humble beginnings through his life as all revolved around one thing, that is making a mark on anything he can get his hands on.