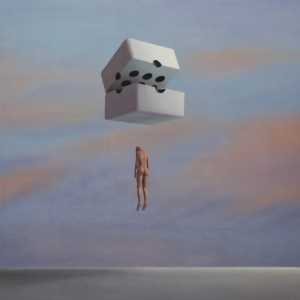 Enter your email address below and we'll email you when there is a new Mehdi Ghadyanloo artwork added.

After growing up near the agricultural fields in the suburbs of Tehran, Ghadyanloo studied at Tehran University’s College of Fine Arts and graduated with a BA in 2005. Subsequently, he earned an MA in film studies from Tehran’s Teachers College (Tarbiyat-e Modarres). Known primarily for his gigantic trompe l’oeil-style murals in central Tehran, Ghadyanloo also creates paintings, with surreal and minimalistic themes. Through his works, Ghadyanloo opens a window into the mood of life in Iran today. At the same time, he provides an autobiographical perspective, portraying the landscapes of his youth, his memories of Iran-Iraq war (1980-1988), and his life experience in the Islamic Republic. Although at times sombre and even suggestive of a failed utopia, Ghadyanloo’s work conveys hope that change can be effected, and it speaks with joy of what remains glorious in gloomy times.

In addition to a great variety of print making techniques, sculpture and his works on canvas, Medhi Ghadlyanloo is also considered one of Iran’s leading public artists. Between 2004 and 2011, he painted over 100 gigantic murals throughout Iran’s capital, after answering an open call from the Municipality of Tehran’s Beautification Bureau. In 2016 he became the first Iranian artist to be commissioned in both Iran and the US since the revolution in 1979, when he completed a massive mural for the Rose Kennedy Greenway project in Boston, US. Text from www.mehdighadyanloo.com