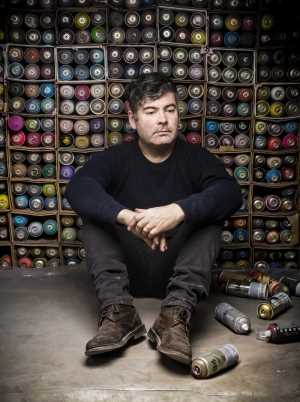 Enter your email address below and we'll email you when there is a new Pure Evil artwork added.

Charles Uzzell-Edwards is the real name of the man behind Pure Evil’s pseudonym. Born in South Wales in the year of 1968 and son of the abstraction painter John Uzzell-Edwards, arts and creativity have always been around in his life.

At the beginning of the 90’s he left the United Kingdom to live in the United States for a few years, specifically, in San Francisco. Influenced by the American west coast’s trends of the moment, he began to have a deeper interest for the urban culture of skate, graffiti and electronic music. By then, Pure Evil began working for the clothing brand Anarchic Adjustment, giving the first steps into the world of graphic design and stencil.

As a multitalented artist, very involved into the electronic music scene, Pure Evil left San Francisco to spend four years in Berlin, working for a music production company named FAX. After this time, he missed London very much and decided to go back there.

Once settled back in the English capital, first Pure Evil graffitis are seen on the streets. The artist meets the people involved with Banky’s Project “Santa’s Ghetto”, his art starts to have a darker look and produces his first prints with Pictures on Walls (POW).

During these last years, Charles Uzzell-Edwards has been traveling all around the world hosting expositions in countries like China, Brazil, Russia and also the whole European continent. Success during these times has been such that has allowed him to open in 2007 his own art gallery in London’s Shoredich. In this place, the artist shows his own work as well as other artists’, and there he finds his space for artistic creativity, both in visual arts and music.

In May of 2012 Pure Evil joins the BBC’s TV show “The Apprentice” and his popularity shoots up. If we add to this, the success achieved with his last series “Nightmares”, we can tell that Pure Evil is an artist of an important international recognition and with a very promising career ahead. Pure Evil’s manikin explores, in words of the artist, his darkest side. Raised in a catholic environment where good and evil are two concepts linked to each other, the critical sense of the artist discusses the most diabolic side of society and the world, filled with wars and hunger that seem to not have an end.

I am a Unicorn