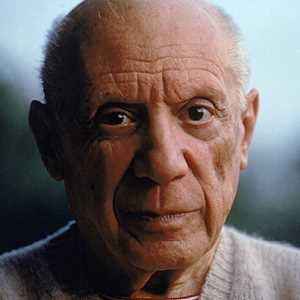 Enter your email address below and we'll email you when there is a new Pablo Picasso artwork added.

Being the most prolific artist of the century, Pablo Picasso completed over 250,000  works  of art. As a young artist whose father was an artist and curator in Spain, he would have one of the best art educations possible, which helped him on his way to become one of the most sought-after artists in Europe and the world. Upon entering the Academy of Arts in Madrid, Picasso was not inspired to work to the conditions set forth by his professors. So, within one year he quit his studies and moved to Paris, where he would receive another type of education – a christening into the most elite artistic and high-brow societies of France. When the Spanish Civil War and both World Wars occurred, Picasso was a pacifist. Even though he proclaimed he was a Communist, he did not involve himself in the politics of his lifetime. He devoted most of his energy to his own works and maintaining the many love affairs he had with numerous women. Even during German occupation in France, Picasso continued painting, spending most of his time in his studio.

Like many of the famous artists of the time, Picasso found great friendship in Gertrude Stein, who as a staunch critic of art of the day helped him formulate his ideas. In his studio, he would come to paint a portrait of her, which took him many sittings to complete. Pablo Picasso had plenty of relationships going on while in Paris, even when he was married. Into his late forties and fifties, Picasso had affairs with younger women, including 17-year old Marie-Thérèse Walter, who remained with him until his death and hanged herself some years after.

Picasso lived a long and active life in both social circles and in his intimacy with his female companions. In his later life, Picasso helped to make a partial autobiography of his life on film called The Mystery of Picasso. Following his death, a film was released in the mid-1990s, written as a biography called Surviving Picasso, which detailed his life achievements, works, and legacy.