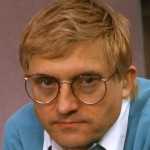 Enter your email address below and we'll email you when there is a new David Hockney artwork added.

David Hockney was born in Bradford, Yorkshire in 1937. He was a brilliant draughtsman, the best known painter of his generation, and gained international success from his mid-twenties. Picasso was one of Hockney’s role models in his demonstration of creative freedom and original thinking. “Style is something you can use, and you can be like a magpie, just taking what you want. The idea of the rigid style seemed to me then something you needn’t concern yourself with, it would trap you.” David Hockney. In addition to his art, Hockney has also published two books on art, David Hockney on David Hockney (1976) and That’s the Way I See It (1993). Notable works for the printed page are his etched illustrations for Cavafy’s Poems, 1967, and Six Fairy Tales of the Brothers Grimm, 1969, some of which we have for sale.

The Princess in Her Tower