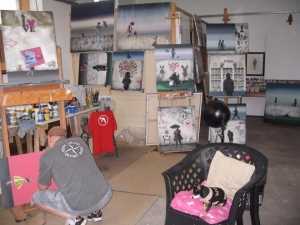 Enter your email address below and we'll email you when there is a new Steve Johnston artwork added.

Born Glasgow 1956. In 1973 Steve attended Carlisle Art College where, during the second year, he opted for a change in medium, preferring photography to painting. He found black & white formats extremely inspiring and exciting to work with, seeing himself in fact as an artist but utilising a camera rather than paint.

Upon leaving college he moved to London where he did freelance work for teen magazines, which led to work for Vogue in 1977, where his work was included in the Pink Punk Book published in 1978. This style of photo launched the first issue of i-D magazine in 1980, where he worked for the following few years. In 1991, when photography no longer became inspirational for him, he started painting seriously again concentrating once again on the medium that he had originally embraced. ?It was then that something clicked and I have not looked back since painting is my life.?

He is always drawn to figures that create a great shape. Details such as how someone is standing or what they are doing come into play afterwards. It is the graphic shape of the body mass that inspires the first ideas. Certain images can unlock powerful emotions which are separate from what the actual content of the picture could create if focused on in more detail. He attempts to take the voyeur somewhere with a sense of the familiar that has an almost ephemeral and ethereal quality, rather than somewhere specific. With the same reasoning, he does not depict figures to be anyone in particular. ?The aim is to portray an essence and emotion rather than a well defined and precise person or location, as I am not interested in set narrative pieces.?

From palette to picture

Steve always takes the shape of his figures from photographs, generally using side or back views to create a more anonymous character. For this same reason he prefers minimal backgrounds.

Using a mixture of oil and acrylic on the same canvas, he likes to experiment and play with colour to draw as much emotional response from the image as possible. The backgrounds are always in acrylic, whilst the figures are always in oil. This is so the oil figure can be worked on in a way that will make it stand out from the background

Lend Me Your Ears