The Princess in Her Tower 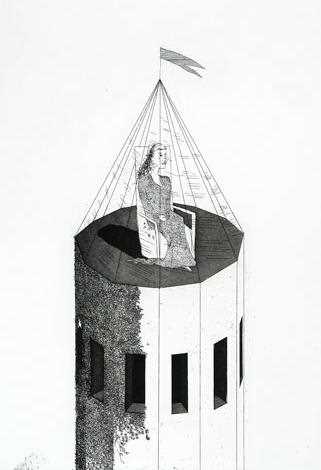 A stunning Etching and aquatint from ‘Six Fairey Tales from the Brothers Grimm’. This copy is unsigned. A copy of the signed and numbered justification page will be provided.

David Hockney had always loved Grimm’s Fairy Tales and had read all 220 of them. He also admired earlier illustrations to them by Arthur Rackham and Edmund Dulac. In 1969 he decided to make his own images. He especially enjoyed the elements of magic in the tales, and his images focus on his imaginative response to the descriptions in the text rather than attempting to concentrate on the most important events in the narrative. They are therefore more than simply illustrations: they stand on their own as images, independent of the stories.

For instance, Hockney chose Old Rinkrank because it starts with the words ‘A King built a glass mountain’, and he was fascinated by the problem of drawing a glass mountain. He made various attempts, even smashing a sheet of glass and drawing the ragged pieces piled up in a big heap, before finding the solution: he depicted a tree and a house with a glass mountain in front which distorts their reflection. For other images, he turned to earlier artists for inspiration: Uccello for the Prince on horseback in Rapunzel, Bosch for the Enchantress with the baby Rapunzel and Magritte’s surrealist games for the room full of straw in Rumpelstilzchen, as well as Dürer and Leonardo.

Hockney’s images are exuberant, inventive and memorable, and he now considers them to be one of his major successes.

Other listings from David Hockney