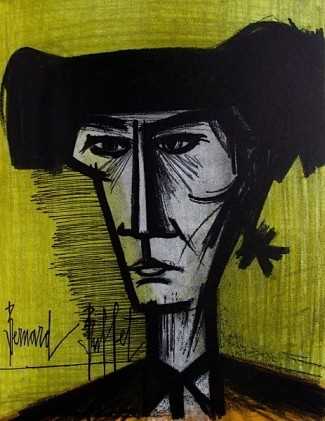 Beautiful Original Lithograph, signed in the plate, printed by Mourlot on a vellum ragpaper agropole, in 1968.

Bernard Buffet was born July 10, 1928 in Paris. In December 1943, he entered the EcoleNationale Supérieure des Beaux-Arts where he studied for two years. After this he worked alone. In 1946, he had his first painting shown, a self-portrait, at the Salon des Moins de Trente Ans at the Galerie Beaux-Arts. In 1947, he exhibited L’homme accoudé at the Salon des Indépendants and in December of the same year he had his first solo exhibition , at the Art Impressions book shop in Paris, organised by Guy Weelen and Michel Brient. Raymond Cogniat bought, for the Paris National Museum of Modem Art, a painting entitled Nature morte au poulet.

Bernard BUFFET has also been classed as a figurative painter, opposed to abstracts, but also and certainly to painters which practised “Social Realism”.

Other listings from Bernard Buffet